And Vanga Made a Mark… 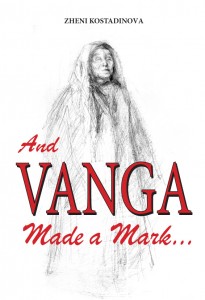 I dedicate this book to the memory of the Bulgarian prophetess Vanga and I believe it will reach those who are looking for the truth and not sensation, those who need to drink water from the source whence it sprang, those who are able to think and ask questions. Vanga was a Question! A question asked by the Universe from the tall tower of consciousness – where the soul dwells and communicates with the Creator.
I am thankful to the people who devoted time and desire to recount their meetings with Vanga, to open their hearts to the public and share unforgettable memories about her. Through these testimonies, we will be able to reveal the truth about Vanga – a person marked by destiny who was living among us and who made a mark…

HRISTO MUSHKOV
Before starting my own account, I will present the memories of my wife Zlatka who accompanied me in the meetings with the great prophetess. We first met aunt Vanga in the summer of 1975. She had come on holiday in Primorsko – in the resort house of the Labour Union, just off the sea shore.

It was the summer of 1975. My parents and uncle had understood that Vanga was on holiday in Primorsko. They desired to see the great phenomenon to find solutions of the problems they were facing. So we decided to go to Primorsko by our car. On arrival we asked the guards for access to Vanga. After a while they invited us. We were pleasantly surprised that she received us immediately. When we entered the room we saw a middle aged, modestly dressed woman with her eyes closed. We were welcomed warmly. My mother and uncle stayed with her, and my husband and I were waiting outside. After some time, they called us in and Vanga told my husband that she liked his driving and he would never have an accident. On leaving she asked to pay us a visit in Burgas when it is convenient for us. We were glad because it was an honour for us!

After some days we took aunt Vanga from Primorsko to stay with us. Back then my father and mother were still alive. Vanga turned to my father and said his lung is fine and has years to live. She told my mother that she would not get married. My mother treated her words with skepticism because she was married then and said silently: “I’m married, but she says I won’t marry…” At this moment I asked Vanga about my son who was 7–8 months old and she answered that he was too young to predict his future but “God is watching over him”.

When she was leaving, Vanga requested that we become friends. After some time, she called us to pick her up from Primorsko and go to Sozopol together with her son Mitko and daughter-in-law Zdravka. So did we. We were strolling along the streets of the old town and we stopped by a window shop with fabric. Suddenly, aunt Vanga said: “That’s the cloth I like!” I asked her how she knew which cloth and she replied it was the icon that showed her everything. On our way to a pub we wanted to visit, she told me something very important for my and my family’s future. Of course, I listened to her words and did as she told me.

After we reached the pub, we went inside and saw it was full. Aunt Vanga told us, that they will invite us by themselves after a while. She turned out to be right once again. They found a table for us and gathered around Vanga – asking her about personal matters, and she kept telling them to visit her in Primorsko, where she would read their future. We spent an unforgettable day with Vanga. During her stay in Primorsko we were always by her side. She hated being bothered by government officials – after all, she had come here to rest.

And so, years passed since our meetings with Vanga. Father had a pulmonary disease and his days were numbered. Exactly three years after our meeting with Vanga he passed away and my mother never remarried. So that’s what aunt Vanga meant. As an officer from the Burgas military school “General Vladimir Zaimov”, my husband suffered an accident, involving the private car of the school, driven by a starshina – thankfully, in God’s mercy, with no consequences. Later our youngest son, Todor, followed his father’s footsteps, graduated the naval school in Burgas and began travelling by ships. On the 6th of October, 2002, as he and his crewmates were heading for the port city of Mukalla on the board of the ship “Limburg”, the 300,000-tonne supertanker was attacked by terrorists. A boat, loaded with explosives, rammed the right side of the ship and caused a huge explosion. Our son, along with a few other sailors, jumped in the water, where all of them were miraculously saved by the Canadian pilot Paul Goddard. Risking his life, he managed to rescue the Bulgarian sailors from the burning waters. For this heroic act, he was awarded the first class Madarski konnik medal. Unfortunately, one Bulgarian crew member passed away.

As far as my husband is concerned, aunt Vanga would tell him: “You are a non-believer and I won’t tell you anything!” However, as they chatted, she secretly predicted things which would later come true. And so, he began to trust and value her. Although her words turned out to be true, to understand them, one had to gain deeper insight into them. My father developed lung cancer (she had told him his lungs were fine) and, as for my mother, she never remarried after his death. Our son, as well as my husband, was saved thanks to God’s mercy. This is what auntie Vanga foretold us, assuring that “there’s a power, watching over you”.

My memories with the great prophetess

I was born in Yambol in 1940. Since I was a child I have been interested in sailing, oceans and seas. I graduated navigation in the Naval Academy “N. Y. Vaptsarov” in Varna. I have been in the sea since 1961. I have had all kinds of positions: from a sailor to a ship captain, local and overseas sailing, on private ships of Bulgarian and foreign companies. I have sailed almost the whole world. I have worked as a ship officer in the Bulgarian Naval Special Forces. I have had managerial functions and have been an expert and Deputy Director of the Port State Inspection in Burgas.

I will share some occasions which happened later and are a proof of the phenomenal abilities of the great prophetess Vanga.

We had conversations and talks with her on the Primorsko beach, among the dunes, while watching the sea. Without me mentioning the subject, Vanga started talking about the Turkish invasion and the division of Cyprus – events which I had witnessed as a ship captain in the ports of Limassol and Kyrenia. Again there, on the beach among the dunes, watching the sea, Vanga said that after a long time a new island would appear, in fire and flames, far in the east and it would be in Bulgarian possession.

This turned out to be a fact, proved by NASA photographs: forty years after the eruption of the biggest volcano in the Pacific, 1000 m off New Zealand in the direction of Chile, an island appeared covering an area of about 27 000 km2 – Principality of New Atlantis owned by the businessman principal Vladimir Balanov – something which Bulgaria has not yet had the courage to admit!

Vanga told me that I would sail through seas and oceans on different ships and face different situations and dangers but I would be always safe and sound thanks to God will.

Here is an example: as the captain of the motor vessel “Balkanstar 1” I was sailing in the Aegean Sea in 1997 during a terrible storm. In this sea disaster, two 6000-ton Greek ships sank whereas I managed to enter Mudros Bay in Lemnos with the guidance of some supernatural power which led us through the shallow waters of the canal connecting the Bay with the Aegean Sea; we anchored successfully. After the weather improved, without any damages, we came back to the Burgas port where we unloaded the ship.

Another example: as a captain of the motor vessel “Alpha BG”, a representative case is the rescuing of six Bulgarian sailors from the prison in the Tanzania capital Dar es Salaam. They were there due to the fault of the ship owner – the Arabian businessman Capt. Bayazid. After the ships “Alpha BG” and “Bushi”, owned by the businessmen Capt. Bayazid and Capt. Tabalo, were hijacked in the Gulf of Aden in Jan, 1998, we managed to decrease the ransom demanded by the pirates and to rescue the thirty-four sailors – eleven Bulgarians, two Syrians, two Romanians, an Egyptian, and a Kenyan, with the help of the Bulgaria’s ambassador extraordinary to the Middle East – Krassimir Tulechki, and the Special Services. In this extremely complicated situation, I relied on auntie Vanga’s advice – to trust God and try to sustain the good psychological state of the crew I am sailing with. And – very important – to stay calm because there are extraterrestrial powers that support me and help me survive!

Another case is the request of my officer from the Secondary School of Marine and Ocean Fishing “General Vladimir Zaimov” who understood that Vanga and I were close and asked me to take him and his wife to Vanga in order to find out what they had to do to have a child. We arrived in Rupite where auntie Vanga received people. Seeing the huge number of people waiting, I had to lie that I had come with my wife Zlatka to see Vanga. They let me in and when we entered, she scolded me, in her way, for coming with another woman – not with my wife. After a while, when she found out why we had come, auntie Vanga told the woman what had to be done. After a year only she gave birth to healthy child!

I can talk more about the memories and exciting meetings with the great prophetess – such a down-to-earth and God’s chosen person at the same time. An Orthodox Christian, truly believing in God. A worthy Bulgarian who was a phenomenon and helped those who believed her and who accomplished precisely what she had told them during the meetings. I will follow her advice for life – to be devoted to my country and to help everyone who needs help and who believes in the power of God.

In tribute to your memory! We will never forget you.