VANGA AND THE CHURCH 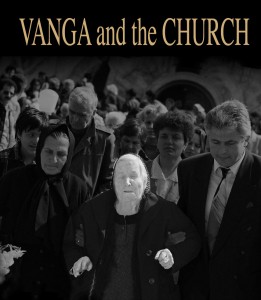 VANGA AND THE CHURCH

This book reveals the extraordinary life of a great person, who was marked by the heavy burden of blindness and the ability to see the fates of people and nations.

It follows through how the Prophetess, on her own initiative and with the money given to her by pilgrims, built one of the first churches in Bulgaria after the fall of communism in 1989.

It features over 100 photographs that illustrate the different stages of the building of the church; they reveal how from a desolate wasteland the place was transformed into an oasis of spirituality and faith.

Our acquaintance with Vangelia Gushterova, the famous Baba Vanga, may seem an absolute coincidence, at first. At the end of 1992, I, a fresh MGIMO graduate, was engaged in business as the president of the Sun Corporation and represented Kalmykia in the Supreme Soviet of the RSFSR. One day, my classmate and friend Stoyan Petrov called me. “Have you heard about Vanga?” – Of course, who has not heard of Baba Vanga?

“Then get ready, we’ll go to Petrich.”

It turned out that before his trip to Moscow, my friend had visited the world-famous prophetess, and she had asked him to bring a “young president” from Russia to her. It was then that they remembered me: a young man (I was not even thirty) and the president even of just a starting commercial enterprise. Perhaps that will do.

We arrived in Petrich rather late and, therefore, decided not to bother the elderly woman. Early in the morning, there was a phone call. “You brought the president. But why are you hiding him from me?” said Vanga to Stoyan. So we went to meet Vanga at six in the morning.

As soon as we entered, Baba Vanga directly addressed me: “Well, young president, how are you?” I was embarrassed: I did not think much of me as a president. However, she did not want to hear anything: “You will be a president; you will lead the people behind you.” A year later, I was elected president of Kalmykia.

Today, I think that for some reason Vanga wanted to be acquainted with me. I know it is a sin to brag, but you can’t argue against the truth: we somehow immediately established warm, friendly relations. 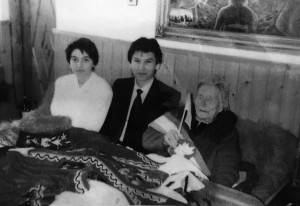 Kirsan Ilyumzhinov with Vanga and her acquaintance. 1994, Rupite

For the second time Vanga stunned me in the spring of 1995. We were drinking tea in her courtyard, and suddenly she said: “Look, he is so thin but he occupies two chairs!” Again, I did not understand, but she insisted: “I see two Kirsans and both are presidents.” In the autumn, I flew to Paris to present the Elista Chess Olympiad at the FIDE Congress. Suddenly they offered me to nominate my candidacy for FIDE presidential elections, and then they elected me to this post.

Vanga loved our country very much. She was fond of Moscow, dreamed of going there, walking through Moscow streets. And she loved Kalmykia. She spoke of our republic in the following way: “I see an oasis; there are many colours around”. In fact, there is steppe only!

Baba Vanga was not able to visit either Moscow or Elista, but she helped Kalmykia. Yes, I consulted with her on various issues when I was the president of our republic but it’s not the point.

At the end of 1995, Lukoil decided to build an oil refinery in southern Russia. There were several site options besides Kalmykia and Lukoil could not decide which one to choose. On my next visit to Petrich, I brought a map of Kalmykia. I spread it on the table and explained the situation. Vanga took a pencil, confidently drew a circle and poked a pencil into its centre with force, so that the pencil broke. “I see a lot of what makes cars drive,” she explained. “And the pipes are all around.”

I looked at the place on the map: it was a small Artesian village in Black Sands. What could be there in that semi-desert area? But after a while Lukoil experts found oil there, and now they build an oil refinery on that site.

In 1994, Vanga was awarded the title of the Honorary Citizen of Kalmykia. Our craftswomen sewed our national dress for her and asked me to pass it on to the prophetess.

Well, I did. Vanga put it on and said: “Now I look like a Kalmyk beauty – all ready to go to the dance!”

Kirsan Ilyumzhinov at Vanga‘s home during her sickness, July 1996

The last time I met with her was shortly before her death, in July 1996. I had to urgently go to Zurich, and yet I managed to make a short trip to Petrich. “Are you in a hurry?” asked Vanga. “Sit down and have a cup of tea.” The heat was terrible, and I really felt thirsty. I took the cup and drank some tea. “Now go,” Vanga continued. “I’ll die here, but you will remember me. And take the cup from which you just drank.” That was exactly what I did. And that was the last time I saw her.

And even now, I sometimes come to Petrich to worship this land, to touch the holy spring in Rupite. At such moments, it seems to me that I feel Vanga’s presence as if she were here with us.